When Chris Adkins gets an idea in his head he tends to follow through on it.

Last winter the co-owner/manager of The Rookery golf courses bought a wood chipper. The course superintendents at Rookery North and Rookery South took advantage of the new machine to do some long-desired tree cutting and trimming. Both courses now look much nicer, and frankly play a lot friendlier for not-so-accurate golfers.

Recently Adkins decided to rent a cherry picker and do some additional high-up tree work at the North course, especially near the 7thand 8thtee boxes. The branches and leaf canopies of some large trees at those locations had made tee shots far more challenging than they needed to be. The tee box turf on the seventh hole was also affected by the trees, which caused thin spots and other problems. 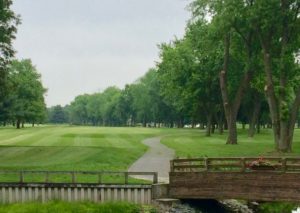 The large trees on the right no longer have the big branches that hung over the tee box area, limiting golfers’ choices of how to attack this par-5 hole.

Rank has its privileges.

The change is dramatic. The now-gone big branches affected tee shots at both locations, especially for players who hit high draws or a push fade.

The alteration also made it possible to put the white tees on the western side of the small stream that divides the teeing area for the 8thhole, stretching the par-5 a bit.

Trees and grass look great together on a golf course, but trees will always outcompete grass for light and air if you let them. This kind of incremental improvement is a good way to restore the balance and keep a golf course healthy and attractive.

During the 2018 PGA Merchandise Show in Orlando, FL this January, I watched Taylor Garrison give a detailed demonstration of the new BLAST Motion system to some very attentive club pros.

Working together with TaylorMade, the Blast Motion sensor devices are placed into the grip cap of two different TM Spyder putters. The data recovered from the motion sensors can be uploaded to either a smart phone app or to the cloud for eventual download and analysis.

The system records eleven different data points such as swing speed, direction, tempo, loft change, and club rotation on both the backswing and downswing. Garrison explained their extensive data analysis shows that the best strokes depend upon using the same time interval for all swings, regardless of distance.

“The idea is to take the same time for each,” Garrison said. “For more length, you move the putter at more speed, but in the same time frame. The inertial sensors can track that.”

The Blast Motion detectors can also work with the full swing, whether using an iron, hybrid, fairway wood, or driver. Once each club is identified in the app, the data keeps track.

I also spoke with Michael Fitzpatrick, CEO and Co-Founder, as he watched PGA Tour Pro Brad Faxon prepare for his presentation about the product. “The system works well for remote coaching, because the data can go to the cloud for downloading and analysist. The Coach version allows the teacher to receive a video with the sensor data. The coach can then do a voice over on the same video and send it back. The system also provides for scheduling appointments for an academy or the coach. It’s a full end-to-end service,” Fitzpatrick said.

The base edition of each version retails for $149.95, with premium service elements also available. For more information, go to blastmotion.com.

Congratulations to the folks who ran this year’s Indian River Volunteer Fire Company golf tournament May 8 at The Peninsula.

The event had over 135 golfers participating and raised nearly $27,000 for the fire company’s operating fund.

The event raised $426 for Miriam’s Table, a charity that provides food and medical relief for children of the Democratic Republic of the Congo.