LPGA golfer Marina Alex hasn’t had a lot of success when playing professionally in her home state, but she’s hoping to improve her record at this year’s ShopRite LPGA Classic Presented by Acer. 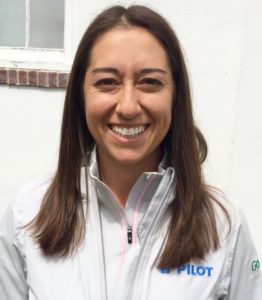 The Wayne, NJ native loves playing the Bay Course at Seaview in Galloway Township near Atlantic City, where the three-day tournament takes place June 8-10. During a recent Media Day interview, Alex said she played the course “a ton” with her family and as a junior tournament competitor. With one exception, however, the course didn’t love her back once she reached the Tour.

“It’s funny, my first year I played on a sponsor invite and it was my first-ever professional tournament. I just finished graduation from college, and the ShopRite crew was kind enough to let me play. I shot 65 or 66 the second round to make the cut and I was so stoked. Laura Davies is playing in front of me and Christie Kerr is playing behind me, and I was like, man, this is amazing, and I don’t think I’ve made a cut since. So I would really love to change that this year.”

“I’m definitely playing better golf, and have a bit more well rounded game this year and even last year, so I’m hoping that the result will be better,” she said.

Alex has had two top-five finishes this season, and is nicely situated in both the world rankings and on this year’s money list. The Vanderbilt grad also had good things to say about the Bay Course.

“It’s a ton of fun. It’s tough but it’s short. There’s so much variety out here. You start of with a not so challenging first hole, and then the second hole is brutally difficult, but then you can get it right back on the third, a pretty-easy par 5. It just gives you a ton of variation. And even some of the short holes, depending on the wind direction that day can play really tough.”

“Number 8 [a short par 4] is not that difficult a hole, but if it’s playing downwind, it’s really really difficult to hit the green and give yourself the correct distance into that hole, to where you can stop it on the green, because it pitches away from you. It doesn’t seem difficult on paper because I think it only measures out at 6,100-6,200 yards. So you’re thinking cakewalk, my par 5s are all gettable, but that is totally not the case,” she said.

Alex has lived in south Florida for several years, but keeps her Jersey heritage listed with the LPGA. “I get Jersey Girl all the time, anywhere I am, because there’s always the one Jersey person. And that’s partially why I haven’t ever changed my hometown. I just think that its such a unique and distinct ability to connect with fans, people who are just coming to watch, and it’s nice to give that back.”

Being the only LPGA Tour-member Jersey golfer at Seaview presents a personal challenge, however. As Alex said, “It’s a little more nerve-wracking. You just want to do well and you want to play your best, and it would be a great story at the end of the day, just to be from a home state and to potentially win a tournament in your home state. That’s sort of a storybook deal. This is my seventh ShopRite Classic so I think I will hopefully have that under control at this point.”

For Cape Region golf fans, the ShopRite is the closest regular professional golf tournament they can attend. The Seaview resort is less than an hour’s ride north from the Cape May Lewes ferry terminal in Cape May. Ticket prices are as low as $15 per day or $30 for the week. For more information or to buy tickets online, go to shopritelpgaclassic.com.

The Cape Henlopen High School golf team finished in seventh place in the 2018 State Golf Championship at Odessa National May 29-30.

Eleven schools, both public and private, originally qualified to play the event. Cape was one of seven schools whose golfers played well enough to make it to the second round for the team category.

As a co-ed tournament, the course setup used a mix of the blue and white tees for the boys and the red and gold tees for the girls. Laura Heien of the Delaware State Golf Association said the yardage difference was set at approximately 90 percent, or 6,450/5,800 yards.

In the individual championship, Phoebe Brinker of Archmere Academy won first place for the second time with a 4-under par total for the 36-hole competition. Austin Barbin of Red Lion Academy took second, one stroke back.

Viking junior Dane Palmer shot 89 in the first round and 85 in the second round for a 41stplace finish and the best combined score for Cape. Senior Nolan Brown shot 88 both days, in a tie for 44th. Junior Saxon Kalb’s combined score of 199 put him in 59thplace. “I do have next year,” he said.

Cape was one of three public schools to finish the team competition, and the only one from Sussex County.

The Rookery Women’s Match Play team played the Wild Quail G&CC team May 22 and won both the gross and net categories.