The perils of slow play 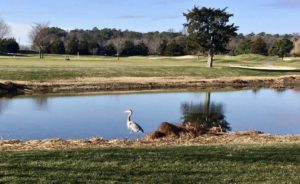 Blue Heron are such as this one are not the only large birds that can be seen on the Rookery Golf course.

My golf buddies and I like to play the game at a fairly brisk pace. If we can finish 18 holes at Rookery South in something between 3 to 3 ½ hours, that’s a nice day.

When the pace of play in front of us slows down to produce a round taking closer to five hours, however, it’s just not as much fun.

A few rounds ago, Tony Gizzi and I hit our tee shots to the fairway on the fifth hole and were walking up for our next shots.

Gizzi said, “Boy, you can really tell the guys in front of us are slow.”

He pointed up in the air to the six turkey vultures circling above the green.

I had to agree.

The challenges of going pro

When golfers enjoy success early in life there’s a natural tendency to assume it will just keep going.

That doesn’t always happen. Sometimes there are a few obstacles to overcome along the way.

In early June the highly touted Maguire twins from Ireland, Leona and Lisa, announced they were becoming professional golfers. Both graduated from Duke University and played for the women’s golf team with sterling records. Leona also held the first position in the world amateur ranking for 135 weeks, while Lisa reached as high as 35thin the same ranking.

The sisters made their professional debut at the 2018 ShopRite LPGA Classic presented by Acer, complete with sponsorship deals with Puma, Ping, Allianz, and KPMG.

I approached the twins the Thursday afternoon before the first round to ask about Virginia Elena Carta, a Duke teammate whose performances in the 2016 U.S. Women’s Amateur I covered for this column. Both were chatty and amiable.

I didn’t see either play their first professional round on Friday. Leona did well, shooting a 69. However, Lisa’s 84 dropped her down to last place.

Later that afternoon, I strolled over to the nearly deserted practice range. Lisa was alone hitting iron shots, using another iron as an alignment guide in front of her feet.

I stood behind and watched her hit several shots. All had the same height and distance, with a slight fade that increased as she continued. I looked at her feet and noticed that her left foot was set a couple inches further back than her right, creating an open stance and a ready explanation for the fades she was hitting.

After watching more than a dozen such swings, I stepped forward and said, “Ms. Maguire?”

She stopped and turned to face me. Her eyes were bloodshot. I do not believe that this was caused by any wind or dust.

I asked, “Did you intend to have your left foot set back from your right for your stance?”

She looked down for a bit and then quietly said, “That happens sometimes.”

She turned again to take another swing. This time she made sure her feet remained parallel to the club on the ground. The balls took off again with the same height and distance, but now flew dead straight.

Lisa was still hitting when I left the practice range. She played a little better in the second round, but missed the cut by several strokes.

Her sister Leona made the cut and finished on Sunday in a tie for 15th.

Leona tied for third in the twins’ next professional golf tournament, the Symetra Tour’s Forsyth Classic in Illinois the week after the ShopRite. Lisa played better, with a pair of 75s, but still missed the cut.

There are no guarantees that one sibling will match the other’s successes. If anything, the records of past sisters on the LPGA Tour are a bit mixed. Consider Annika (72 LPGA wins) and Charlotte Sorenstam (1 LPGA win), for example, or the fact that Brooke Henderson’s sister Brittany put a halt to her own Symetra Tour career to caddie for Brooke. On the other hand, the Korda and Jutanigarn sisters did very well this season.

The Maguire sisters will mostly play different tours next season. According to Irish media reports, Leona missed the finals for the qualifying tournament series for the LPGA, and will now focus on the Symetra Tour. Lisa will compete on the Ladies European Tour.

Both sisters have a strong following, and they have good chances to succeed. It just might take a little longer than they thought.

I always enjoy watching golf tournaments on television, but now I have discovered some really fun golf stuff on YouTube.

If you have not yet been fitted for your clubs, these videos should help you tremendously before you make your first appointment.