The Cape Henlopen High School golf team won its sixth victory of the 2019 season with its 182-225 win over Dover High April 30.

Viking senior Saxon Kalb earned medalist honors with his 6-over par 42 on the back nine at Maple Dale Country Club. Dane Palmer finished one stroke back with his 43.

Reed Jones shot a 45 and Ben Skelley scored a 52 to complete the team scoring for Cape.

Viking head coach Rob Harrod said his top three players were “on their normal game,” a nice response from the team’s disappointment against Indian River at Cripple Creek CC before spring break.

“All three played well and learned things that will help them go lower,” Harrod said. “Across the board we need to work on our putting.”

Cobra Golf is increasing its market presence as one of the major golf club manufacturers, and it is frankly deserved.

The wide range of equipment they offer, sometimes in ways that at first seem a tad exotic, have nonetheless grown in popularity at both the amateur and professional level.

I met Chad DeHart, Cobra’s manager of innovation and artificial intelligence, at the large Cobra booth at the 2019 PGA Merchandise Show. We started our conversaion with the new King F9 Speedback Driver.

The precision CNC milled face is the most prominent feature of the new club, in my opinion. This is an intensive bit of club construction, but DeHart said it significantly reduced quality control issues that sometimes arise when using the traditional hand polishing technique. It is also visually striking but not distracting at address.

Other design features helped move weight back from the face, lower the club’s center of gravity, and improve aerodynamic characteristics. As DeHart said, “This was a home run for us, with an average club head speed increase of 2 mph over prior models.”

Cobra also made sure the F9 drivers are extremely adjustable, for which your local club pro can be very helpful. The three basic driver lofts are 9, 10.5, and 12 degrees, with 0.5-degree adjustments up to 1.5 degrees each way, as well as draw options. The lie angle is also adjustable.

In addition to the optional Arccos motion detector grip ends, the company offers four different shaft options with no upcharge, a nice trend in the club business.

Cobra also offers the CNC milled face finish in its fairway woods. DeHart said they are seeing increases of 2 to 2.5 mph with these clubs. These woods carry forward the classic Cobra baffler rail design on the sole, and the height of the two rails increases in the higher-lofted models. 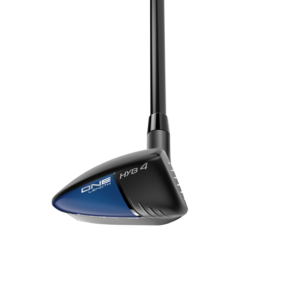 Cobra’s One-Length hybrids come in several lofts, with a shaft equivalent to a 7-iron.

I was most impressed, however, by what DeHart said about Cobra’s One-Length hybrids. PGA Tour winner Bryson DeChambeau led the way with his collaboration with Cobra on one-length club designs, and those models are doing better and better each year in the marketplace.

The One-Length hybrids are the same 7-iron length as the irons in the OL sets. By comparison, my old Cobra 5-hybrid is just over 2” longer than my Hogan 7-iron.

DeHart said the response to the One-Length hybrid exceeded all expectations. “We sold out quickly, which was a big surprise,” he said. As DeHart noted, many golfers buy these hybrids while keeping to the normal length variations for the rest of their clubs.

The customer response reminded me of how well the Perfect Clubs sold back when Peter Kessler was flogging them on Golf Channel infomercials over 15 years ago. These were, in essence, 6-wood heads fitted onto 6-iron shafts. The unusual design sold extremely well.

Some ideas just stay good a long time, it seems.