When the regular season ended May 18 and the complicated state tournament calculations were completed, the Cape Henlopen High School golf team just missed qualifying based on its 10-4 record. 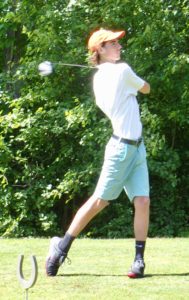 Ten teams statewide use their season record to play in the state championship, to be held May 28-29 at Cripple Creek Country Club. However, 36 players from the other golf teams also qualify – and if enough of those players come from one high school, they also qualify in the team category. The Henlopen Conference was allotted eleven of those 36 statewide spots.

The Vikings rose to the challenge May 21, with a fourth place finish in the HAC tournament at Mulligans Pointe in Georgetown. Five Cape players finished in the top 11 spots available for individuals in the States, and thus became the 11thteam.

Dane Palmer’s 87 earned him an 8thplace HAC medal, and Reed Jones won the medal for 15thwith his 92. Ben Skelley and Tommy Burns each shot 95 to make the States, and Saxon Kalb earned one of the last few spots with his 99. Matt Miller of Caesar Rodney finished in first with a fine 72.

A fitting way to improve your golf game (part 2)

Jayne Tamburello walked up to the Mizuno fitting tent at the May 4 Demo Day at Rookery South with a major update in mind. The Rehoboth resident’s current set of clubs dated back to 1998, but she hadn’t played them for most of the past two decades. She said she was beginning to participate in The Rookery’s regular Thursday evening women’s league scramble, and smiled as she told me that other league golfers had teased her about the old clubs.

When she asked Mizuno club rep Chuck Henry if Mizuno sold women’s clubs, he quickly responded that his company doesn’t sell by gender. He then gave her a special 6-iron that was fitted with Mizuno’s 3D Shaft Analyzer, and said they would use that device to find her clubs that would suit her game.

After each time Tamburello made a slow, steady swing, Henry collected the data from the analyzer. After her third swing, Henry told Tamburello they would try out a lightweight Senior A shaft and go from there.

He explained to her that the analyzer showed she had a 50 mph golf swing, with a late release of the club shaft at impact. Because Tamburello is 5 foot 8 inches tall, he recommended a standard club length, but her swing data also suggested the club’s lie angle should be set 2 degrees flat.

As for the clubs themselves, Henry recommended Mizuno’s Hot Metal JPX 919s, in the lighter B-weight option. Tamburello tried several shots with different clubs in the new configuration, and hit them well. She also tested a new driver and had enough success with those attempts to buy one.

Tamburello kept smiling as Henry worked up her order form. It looks like there will be no more teasing about her old clubs.

(Part 3 will appear in an upcoming column).

Rookery Director of Golf Butch Holtzclaw is holding another Ladies Clinic starting June 3 at 5:00 p.m. at the Rookery South range. For six Mondays in a row, the one-hour sessions will cover the full swing, game management, club fitting, the short game, and more.

The Kings Creek Country Club 9-Hole ladies group hosted the Lady 9-Holers from Cripple Creek CC May 15, for a 2, 1, 1 game. For this team event blending players from both groups and paired by ABCD, the two best nets scores for the par 3s and the best net score for the par 4s and 5s are used.

Jeanne Allen, Cyndy Simeone, and Marcy Saliba finished second net. Daisey Hudson was closest to the pin on the 5thhole.