A fitting way to improve your golf game, part 6 – the return to Club Champion

Last April I wrote about the opening of the new Club Champion fitting store near Newark, DE. Club Champion sells a variety of clubs of all types, typically paired with premium shaft options, and aimed at golfers who are willing to spend well to improve their chances on the course.

After that piece appeared, a company representative graciously invited me to return to the store for a fitting session of my choice. 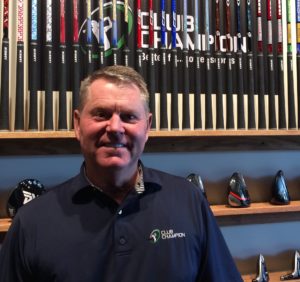 I met shortly thereafter with the new store manager, Joe Guillebeau, who had recently brought an end to a long and distinguished tenure as the head golf professional at Wilmington Country Club.

We hadn’t met before, but as we did the usual Delaware thing of learning whom we both knew, the number and breadth of our golf connections kept growing. Our pleasant conversation added 90 minutes to the normal 2 1/2 hour iron/hybrid session I chose, but fortunately we didn’t hold up other customers.

We also talked about the assembly process. After agreeing on the proposed clubs and their features, the order is sent to the company’s fitters in Chicago. “Their craftsmanship is amazing,” Guillebeau said. To make sure the swing weight is correct, the assembly process begins with the grip selection, in my case the Winn Grip Dri-Tac Midsize. That is because grip weight easily affects the swing weight. “The last thing on is the club head,” he said.

The fitting began by establishing a baseline with my 6-iron, a Hogan PTx with UST Recoil 71 gram graphite shafts. “We see what can be improved, and fit you for the shaft first,” Guillebeau explained. He then handed me a Srixon 6-iron with a swappable shaft, and I began hitting shots into a screen and checking launch monitor results. After a few tries and comments or questions, a new shaft would be exchanged for another set of swings.

Given my preference for graphite shafts instead of steel, we limited the shaft options accordingly. I did not otherwise limit club or shaft choices, and left it to Guillebeau to make the selections for me to test.

After trying options from KBS Tour and Fujikura, we settled on the 50i model made by Accra. At 58 grams the i Series shafts are lighter than the UST Recoils on the Hogan irons, but also come with a stiff tip end section that met my needs and swing tendencies.

After that, we tested several club heads. A few were game improvement models, but most were player’s irons such as the Titleist AP3. We eventually settled on 2018 Callaway X-Forged irons. Well-struck shots feel simply great, with a slight clicking sound that gives immediate feedback. These forged blades also offer forgiveness for miss-hits. My left to right dispersion is noticeably tighter.

We then moved to the hybrid fitting. I told Guillebeau I gave up on hybrids years ago because I could not keep them from going left. I used a 4-iron or 7-wood instead, depending on the distance needed. I could hit both reasonably well, but the 4-iron was often a bit of a low screamer.

Guillebeau said my reaction to past hybrid designs was common for golfers who don’t slice the ball. He said some current hybrid models no longer feature the draw bias that gave me such trouble, and handed me a 19-degree Titleist 818H1 as proof.

I am happy to report he was correct. A normal swing produces a nice straight shot, with deliberate draws and fades among the golfer’s options.

Inventory limitations kept me from trying any other hybrid lofts, however. Guillebeau suggested I use a 21-degree 818H1 as the 7-wood replacement, and switch from the 4-iron to the 27-degree model. The hybrids were also assembled with Accra graphite shafts, in the FX 2.0 100H60 M1 configuration.

I also agreed to have the clubs go through the SST Pure process, at a per club up-charge. This process tests each shaft and optimizes its orientation to the clubface.

When I later picked up the assembled clubs, I asked Guillebeau what he thought I needed from the fitting. I had not asked him at that time because I did not want any such notions to affect my testing. He said I only needed a bit more height and speed.

The new clubs meet those goals. The irons are about 1/4 to 1/2 club longer than the Hogans, and the hybrids are a major improvement for longer shots to the green. I recently made my first ever par-5 eagle, with a 181-yard hybrid second shot that hit the pin and stopped 4 feet from the hole.

I do not expect my handicap index to drop from 7.2 to scratch just because I bought these clubs. They were not cheap, either. As I see it, the fitting and purchase is just part of a long-term investment and commitment to see how good a golfer I can be. 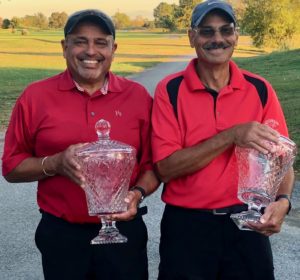 Congratulations to Sid Simon and Jim Sanitate for winning this year’s men’s league championship at The Rookery.

The two Rehoboth area residents began their campaign against nearly 40 two-man teams in May and finished at the top on October 4.