The lesson inside the fitting

During last summer my driver started acting up.

Despite pivoting off a fixed right knee, a swing tip I’d used for years, my drives were going every which way. For every good result there would be a drive that went left and wrong or right and wrong.

I scheduled golf lessons with Chris Krueger, the director of instruction at Kings Creek CC. After a few swings, he firmly suggested I focus my backswing on turning my hips as far back as possible, and not to worry about my right knee. We also worked on bringing the club head back on a straighter path in the last foot or so before impact.

With a lot of practice, Krueger’s instructions worked as planned. A new workout regimen that included fast twisting from side to side with a 10-pound medicine ball also helped.

I used impact tape to keep track of my progress. My driving significantly improved, but the impact locations on the club face were rarely in the desired center. Most were on the high side toward the toe, with the occasional heel strike to remind me of my limitations.

Some online research about club face location, including YouTube videos from club fitter Ian Fraser of TXG Golf, convinced me to seek additional help from Joe Guillebeau of Club Champion near Newark, DE.

I showed Guillebeau my collection of impact tapes, and thought I heard a low whistle.

After warming up with shorter clubs, we established a baseline with my driver, a 9-degree Ping G400 Max with a stock 60-gram Aldila XTorsion stiff shaft. Almost every shot went a nice distance, but left.

Guilebeau stopped me after a few drives to go over the data display from the Trackman. “You’re hitting 4 degrees in to out on your club path, and your attack angle is 5 degrees up and out. You’re coming into the ball too much from the inside,” he said. In addition, with the bottom of my swing about 6 inches behind the ball, the club head naturally pointed left at impact. And because my clubface to path angle is less than my swing, a draw (or hook) was the only possible result. The toe hits on the impact tapes proved the same thing.

“You need to feel like you’re hitting over the top,” Guillebeau said. “You won’t really do that, but if you go for that feel it will help.” He placed an alignment stick next to my stance that helped me avoid a too-inside takeaway. It took a few tries before I started to reduce those numbers and start landing more drives toward the center, though still going more left. 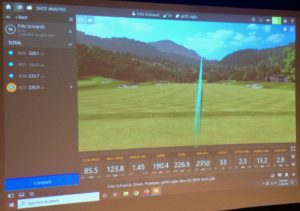 The TXG videos and other research also showed that the driver shaft can help improve strike location, if its design matches the golfer’s swing characteristics. The next step in the Club Champion fitting session addressed that need.

As Guillebeau said, “All the drivers out there right now are very similar in what they can do distance-wise and for adjustability. The shafts change how the drivers perform for each player. That’s why the pros have club head deals, but don’t have shaft deals. They experiment with different shaft designs all the time.”

The stock shaft for the G400 Max couldn’t match my timing. Even with good swings, the strike locations rarely appeared in the same places, and often missed the center of the face, which is what produces the best results.

Shafts sold at Club Champion and similar shops use assembly and quality control methods that improve the chances that each shaft model will be the same, especially compared to machine-assembled stock shafts. “The shafts we have here can’t be found in stores like Dick’s,” Guillebeau said.

Using a Ping G410 driver as the G400Max equivalent, we first experimented with a heavier, stiffer shaft from Accra. That quickly proved to be a step in the wrong direction.

The next shaft option tested was a Fujikura Atmos Tour Spec 6S Blue. I hit better shots, with club path numbers in the low 3s and face to path angles also in the 3s. Distance gains averaged 8 yards, with a 1 mph increase in club head speed.

We moved on to the Raijin 64 Three shaft from VA Composites. Guillebeau put a piece of impact tape on the club head, and the results were immediately gratifying. I hit the middle of the clubface each time.

My club path averaged 2.4 degrees in to out, with a 0.4 face to path angle. My attack angle also lowered to an average 3.0 degrees. With only a 1 mph increase in club head speed, but with smash factors averaging 1.45, the carry distances were 13 yards longer than what I could do with the Aldila stock shaft. Each shot landed in a very tight pattern, either on the centerline or a few yards right of it.

The combination of lessons, practice, swing analysis, and advice certainly helped. The new shaft also matches my swing very nicely, and I look forward to re-creating my fitting results out on the course.