The Cape Henlopen High School golf team is busy working on tee shots, bunkers, putting, and other challenges in preparation for the 2020 season.

The Vikings are among a select few downstate public schools to qualify for the state high school golf championships, with a T-9, 7th, and 9th place finish in the last three years.

Head coach Robert Harrod completed his first year at the helm in 2020, and is looking forward to the challenge of repeating the team’s performances in the Henlopen Conference and the States.

Several returning varsity players hope to contribute. Senior Ben Skelley and Sophomore Tommy Burn played in the first round of the 2019 States and could be the nucleus of the starting six for this year. Other returning Vikings include Quinn McCullough, Flynn Kalb, Nick Vitolo, Seth Reynolds, Conner Wall, Ryan Griffith, and Jeremy Trost.

Harrod has extra help for this large contingent this year, with new assistant coaches Bill Geppert and Mike McGinley, as well as volunteer coach Reed Jones, a 2019 Cape grad and former Viking golfer.

Geppert is well known in the Cape Region sports community for his 22 years as the highly successful swim coach for the high school. The marine science and robotics teacher has also coached football and indoor track. “Golf has a technical side to it, not unlike swimming. I really love teaching and helping kids improve in anything that they do,” he said.

This is McGinley’s first foray into coaching. A recent addition to the Cape marine science and biology faculty, he formerly taught at Milford High. “I grew up loving the sport and was originally taught by my dad. I hope to spread my love for it to the students and eventually my own children,” he said.

I am continuing my role as the plucky comic relief character in my second stint as a volunteer coach for the team.

Coach Harrod said, “I am really excited for the upcoming year. We have made getting in golf shape a priority during these first few days of practice. I am certain that will pay dividends later in the season. I am also excited about the new additions to the coaching staff. Gep is a natural coach who brings a championship mentality along with a ton of practical golf knowledge. [Coach] McGinley has a love of golf and teaching and his positive attitude is contagious. Reed Jones also is helping and he relates to the kids.”

“I believe in what we are doing and I am looking forward to an even better year than the last,” Harrod said.

With the large number of student athletes trying to make the playing squad, the coaches are busy assessing talent and giving instruction. The ongoing renovation of the range at Rehoboth Beach Country Club will keep it closed this spring, so the Vikings are expanding their practice locations as they prepare for the new season. Harrod expressed deep appreciation for the on-site support provided by Rookery South, American Classic Golf Club, and Midway Par 3. 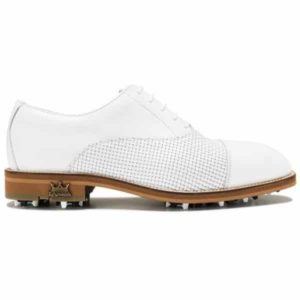 The Roma, in white

Some things about golf are undeniably appealing because of their beauty.

In addition to golf courses such as Pebble Beach in California, the sport offers other lovely items for the appreciative observer, such as the high quality shoes sold by Lambda Golf of Portugal.

The company enjoys its current success in Europe and the Asian markets, and has begun to make inroads in North America. At the 2020 PGA Merchandise Show last January I met Lambda sales manager Miguel Couto, who showed me some of the gorgeous leather shoes they market to their high-end audience.

Couto said the sale price for their shoes begins at about $360 in the United States, but can command over $700 a pair in South Korea. “The Asians value luxury items for their quality and design,” he said.

As if to prove his point, his Japanese distributor appeared at the Lambda booth just as we were talking. She gave Couto a big hug, and was excited to share good news with him that I did not overhear.

According to Couto, Portugal takes second place to Italy worldwide for the quality and appeal of leather shoes. He said the company’s golf shoes are only a small part of their overall market reach in the footwear industry. 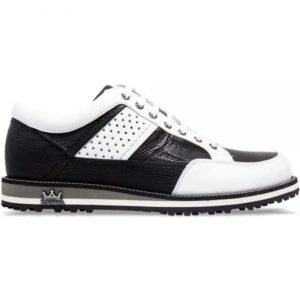 I was partial to Lambda’s black and white Torino model, as well as the white Roma style. Each relies upon a waterproof membrane for water protection. The spikeless Torino uses a soft TPU sole, while eleven spikes surround the leather sole on the Roma.

Lamda shoes are currently available online, with the closest retail store near New York City. Couto hopes to expand further in the United States, if he can make suitable arrangements with a distributor.