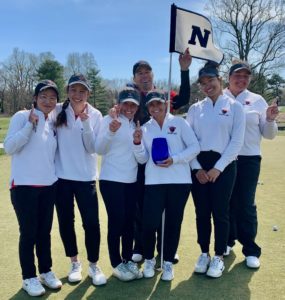 Freshman Amber Pennington (155) finished in second place overall, two strokes behind medalist Julia Calomiris of Towson University. Pennington’s even-par 72 in the second round was the lowest score posted by any player in the tournament.

“The first day was cold and windy and that course is tough,” said Rick McCall, Jr., DSU’s head golf coach. “Amber is just a freshman, but she played a really steady game in the second round.”

A combination of inexperience and challenging weather contributed to the first losses of the season for the Cape Henlopen high school golf team April 1, against Caesar Rodney and Polytech at Wild Quail Golf & Country Club.

“[It was a] horrible day to play golf yet the team battled – mostly themselves and the weather,” head coach Rob Harrod said. Cape’s 212 total was two strokes higher than Polytech and 23 more than Caesar Rodney. With high winds and a soggy course from heavy rains the night before and the morning of the match, the round was going to be tough for all three teams.

Sophomore Ethan Mercer led the Vikings with his 49. Junior Seth Reynolds’ 50 was his best score of the season thus far, which Harrod attributed to a quiet, business-like approach to playing. Junior Tom Burn’s 53 was his worst round of the year, and freshman Dylan Baker posted a 60 in his first-ever varsity match to complete the team scoring.

This is a rebuilding year for the Vikings, historically one of the better teams in the Henlopen Conference. No team member has more than one year’s experience playing on the varsity, and like every other Delaware scholastic golfer all of Cape’s golfers missed last season due to the pandemic. The scores posted by Cape and many other schools in these early matches reflects those unfortunate facts.

The good news is that the Cape team bonds well, and the players are both coachable and high-spirited. After spring break the Vikings have a full week of practice beginning April 12, with the next match set for April 19 against Delmar.

Here’s how you can help

If you would like to help the Cape Henlopen High School golf team, you now have a special opportunity. A wide variety of Cape Golf logo clothing, including hats, hoodies, shirts, and jackets in men’s and women’s designs are now on sale at https://capegolf2021spring.itemorder.com/sale through April 18.

Proceeds support team expenses. Thank you for your assistance!

The folks at Tifosi Optics sent me a pair of the eyewear company’s new Centus golf sunglasses to test.

The wrap-around Smoke Bright blue polycarbonate lenses are shatterproof, and the tint works well in the variable green environment of a sunlit golf course. The hydrophilic rubber nose pieces keep the glasses snug and secure, with no shaking or moving during the swing. They are also handy for biking.

The price is also appealing, at only $25 a pair. For ordering or more information, including detailed description of many other styles, go to tifosioptics.com.

We played The Rookery April 6 and noticed how well the greens had recovered from the recent aerifying and sand spreading. My golfing companions and I also saw that some hole locations were in some rarely seen places, such as the far-right sides of the 5th and 12th greens.

Golf hole locations are not just a matter of placing one third in front, one third in back, and one third in the middle of the greens. There’s more to it, as Rookery course superintendent Mike Pyne explained.

He said he asked a staff member to “try and spread the love. Around cups there’s very high traffic with this much play so we must move the traffic areas all around the greens to help them and keep the course interesting to golfers.”

If a rotating hole location practice is followed routinely, the full scope of the green designs will be experienced and perhaps even enjoyed after several rounds.

Diane Braver won first place in the gross category, with Joann Zorb in second and Ann Reid in third.