Founded in 1986, the Fund has supported 167 students with over 1.5 million dollars, beginning in 1988. Jerry Medd, Fund president and son of co-founder R. Gerald Medd, addressed the recipients, their parents, and others at the award ceremony on the bayfront lawn of the clubhouse.

The Delaware State Golf Association assisted the Fund for many years by helping with publicity and providing linkage at the DSGA site for the application process. That arrangement continued after the recent merger of the DSGA with the Golf Association of Philadelphia.

Medd said nearly 20 applicants filed for this year’s awards, about the same number as in past years. “It’s amazing that’s how few we get. We’ve helped a lot of young people get through their college careers,” he said.

Hannah Lydic of Ocean View, DE won the Robert McCurry Award, worth $7,000 per year or $28,000 total. The Sussex Academy graduate won the DSGA Girls Championship in June. She will attend the University of Richmond.

McCurry was one of three co-founders and a long time Toyota executive. In the early days of the Fund, he brought Toyota-sponsored pros such as Chi Chi Rodriguez and Mark O’Meara to well-attended clinics at RBCC, complete with a raffle of a donated Toyota vehicle.

Evan Barbin, a graduate of Red Lion Christian Academy who finished second in the DIAA Boys Championship in June, won the R. Gerald Medd Award. He will receive $6,000 per year ($24,000 total) and will attend Liberty University.

Kayla Brosius of Magnolia and Anthony Ciconte of Wilmington won the Ron Barrows Award, each worth $4,500 per year ($18,000 total). Barrows, the longtime head golf pro at RBCC, was the Fund’s third co-founder.

The DJGS Fund’s current primary source of revenue is its popular golf tournament, scheduled this year for August 29. “When we have our tournament, a number of the recipients come back and play in it. It’s sold out and we have a waiting list,” Medd said. 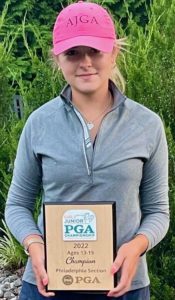 She shot 69-77 in the one-day, 36-hole event. Brockstedt played two more holes in sudden death, defeating two other golfers for her second-place finish.

Kevin McTigue is an active league golfer at American Classic Golf Club, and a past hole-in-one maker at the popular course.

On a recent Tuesday morning, he was the last golfer of the day to try for the closest to the pin money on the par 3 fifth hole.

His ball stayed on the green – by about two inches, he said.

Nonetheless, it was the day’s best and only ball to make the green, at only 38 feet 5 inches from the hole.

That was all that he needed.