Walking the course with style

The no-cart restrictions placed on golf courses in response to the coronavirus pandemic had two negative effects. 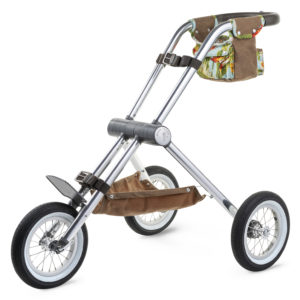 For those who prefer using a motorized cart, or who for medical reasons must use them, the curb on carts put a real damper on their interest or ability to play.

For others, however, this is an opportunity to reintroduce golfers to the health and recreational benefits of walking, especially on flat courses such as in the Cape Region – and three-wheeled pushcarts can play a big role in encouraging that prospect.

At this year’s PGA Merchandise Show, Walker Trolleys entered the golf market with the debut of its upscale Cape Model. The Austin, TX Company ‘s brushed aluminum, waxed canvas, and handcrafted leather design may remind some folks of old Post Office trolleys. Others will see the inspiration of classic bike frames or the aerodynamic lines of roadsters from the 1930s, complete with pneumatic white sidewall tires.

Those reactions are what CEO Brad Payne had in mind. He and his brother-in-law, an industrial engineer and equally avid golfer, chatted about carts at a family gathering in mid-summer 2018. That led to developing a prototype and the decision to start offering the Cape Model for sale.

The Cape Model looks clever and has patents pending. A one-fold handle should make opening and closing the cart very easy. The central hub design causes the handle and legs to bend on two axes, creating a compact set for storage and movement. The storage accessory has space for both beverage and sand bottles.

Production has not yet started, but pre-orders are being taken now with a $100 deposit toward the $399 total at walkertrolleys.com. A non-folding version for rentals by golf course operators is also in development.

In addition, at the company’s website fans of walking while golfing can buy Push Cart Mafia tee shirts. The graphic features three pushcarts separated by 6 feet, with the hashtag #practicesocialdistancing underneath. All profits from the shirt sales go to Save the Children, a non-profit charity.

Last year I tried a new ball fitting system touted by Bridgestone Golf. Using my preferred golf ball, a TaylorMade Project (a), I hit driver, 8-iron, and wedge into a net with a GC Quad launch monitor gathering the results. Bridgestone staffer James Anderson went over the data and recommended a Bridgestone ball alternative.

This year, Bridgestone took ball fitting to another level. Called VFIT, golfers take slow-motion videos of their typical driver swings and upload the video to the company for a recommendation.

I tried VFIT in the blustery winds of January’s Demo Day at the PGA Merchandise Show, with Anderson again watching. I hit a draw into a heavy left to right wind. The recommendation came back a few days later, suggesting I should use Bridgestone’s new Tour B RX ball.

“We think of it as the evolution of ball fitting,” Bridgestone marketing manager Elliott Mellow said. “If you have a phone you can be fit.”

Mellow said Bridgestone’s Tour balls feature the company’s new REACTIV cover technology. The urethane cover includes compounds that are “impact modifiers,” he said. The outer layer reacts differently depending on the amount of force applied to it.

At driver speeds the cover sharply stiffens, providing a maximum amount of rebound effects. At slower wedge speeds, however, the material remains more pliant. The ball stays on the wedge face a bit longer, resulting in more “hit and sit” landings on the green.

This kind of reactive material has applications elsewhere, as noted in recent stories about sports fabric research done by the University of Delaware.

The Bridgestone Tour line comes in four models. Tour B X is designed for golfers with driver swing speeds above 105 mph, and is used by PGA Tour golfer Bryson DeChambeau and LPGA star Lexi Thompson. Tour B XS is aimed at fast swingers, but is a bit softer. Tiger Woods uses this one.

The Tour B RX is for golfers with driver swing speeds below 105 mph and designed to promote distance over greenside performance. The Tour B RXS takes the opposite approach for drivers with slower swings, emphasizing greenside spin and accuracy. Mellow said this ball’s distance numbers are an improvement over last year’s version. Tour Champions players Fred Couples and Rocco Mediate use the RXS model. 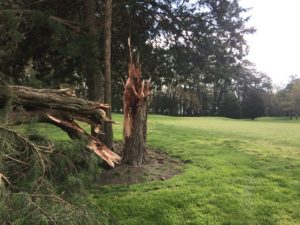 An April 13 storm knocked down another cedar tree that once guarded approach shots from the left on Rookery South’s fifth hole.

The current pandemic has apparently done nothing to dampen the spirits of golfers looking for a new ball. According to Adam Rehberg, the Golf Ball Fitting Manager for Bridgestone, “VFIT has been extremely active during the social distancing mandates put forth by the CDC. We have seen a substantial uptick in usage.”

From roughly mid-March to mid-April, Bridgestone doubled the number of VFIT analyses it conducted since the official January launch of the sales initiative.

Rehberg said, “We are seeing submissions from all over and have heard from several people. They feel like it is a way for them to stay connected to the game without actually having to play, especially in areas where play isn’t possible.”

That makes perfect sense at this decidedly imperfect time.