Governor Carney’s 10th modification to the State of Emergency Order regarding the coronavirus threat, issued April 6, increased the restrictions on Delaware golf courses and golfers beyond those already in place.

Except for bathrooms, indoor areas such as locker rooms and clubhouse must be closed. Food service restrictions are the same as other restaurants.

The courses may not provide motorized carts or pull/push carts.  In addition, players must make do without course-supplied pencils, scorecards, or snack carts.

Tee times must be arranged to provide adequate social distancing. Flagsticks and holes must be raised to prevent players from touching the cups. Players may not go onto adjoining properties to retrieve stray golf balls.

Club-sponsored or organized caddie programs, such as the one run by Rehoboth Beach Country Club, are not allowed. Relatives or household members of players may carry the bag while still maintaining the required distancing.

The United States Golf Association and the Delaware State Golf Association published guidelines for playing and reporting golf scores for handicapping purposes, under these and similar rules put in place elsewhere.

The requirement to raise the cups means there can be no more putting out. Therefore, the DSGA guidance suggests golfers post their “most likely score” instead. As it noted, “[T]he player should consider the number of strokes mostly likely required to complete the hole, and determine whether the ball would have been holed or not. Most likely score is at the player’s best judgment and should not be used to gain an unfair advantage.”

The USGA offered a few suggestions for bunker play when the rakes are absent. One option would make the bunkers part of “the general area,” which allows the use of Rule 16 (Abnormal Course Conditions) or Rule 19 (Unplayable Balls), instead of following the bunker play requirements of Rule 12. For example, the bunkers could be declared Ground Under Repair, which includes an option to take free relief outside the bunker under Rule 16.1.

Club handicap committees may also consider adopting a preferred lie rule (place the ball elsewhere in the bunker within one club length, without penalty).

In all cases, the DSGA and USGA urge golfers to smooth over the bunkers after play with their feet or a club, for the sake of others.

You might think that last bit of advice was unnecessary, but experience proves otherwise.

If you’re interested in helping to reduce the monetary impact of the virus on your favorite course, you have some options.

Ask your club pros to book lessons for a future time slot, or if you can sign up for the range program. Pre-ordering golf balls, gloves, or a logo item for later pick-up might also be something you could arrange.

The Delaware State Golf Association Scholarship Fund provides serious money for worthy applicants looking for help with their college expenses. The Fund is supporting twenty students during the current school year with a combined annual contribution of over $65,000

Each year, four or more students receive a four-year stipend, based on the award committee’s assessment of scholastic achievement, community involvement, and love for the game.

The applications are due May 1, and the forms can be downloaded from the Association’s website, dsga.org. For more information, contact Ron Barrows at 302-227-4404, or at r.barrows@verizon.net.

The ranges are open, including the grass tees 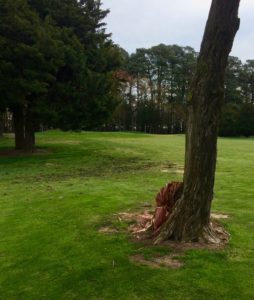 An April 7 storm knocked down one of the cedar trees that helped block approach shots to the dogleg left fifth green at Rookery South, if the golfer cut too much off the dogleg in the drive. Those golfers are probably smiling now.

The normal start of the Cape Region golf season is April 1, but there’s not a lot of normal going on this year. Courses are limiting play to Delaware residents in keeping with the current state of emergency order.

While practice ranges at local clubs are nowhere near as crowded as they might otherwise be, one welcome sign of the new season is that at many courses artificial mats are no longer the only places golfers can tee off.

During the winter the plastic mats do their job, but those green rugs do have their drawbacks. It’s not hard to mistake a fat swing with a good one, for instance. In addition, the rubber tees don’t always match the height that a golfer would set for her normal tee shots with her driver.

At my April 5 practice session at Rookery South’s range, the Mats Only sign was gone and the large grass teeing area was completely open for use. I don’t expect that to continue. Normally the Rookery’s greens keepers stretch two long parallel lengths of rope to define that day’s practice tee area.

I use a tee for practice shots, with the tee set even with the ground for iron play. I tend to pick the ball and not take divots, but leave shallow ones when I do.

Not everybody does that.

I suggest you check with the pro staff or course superintendent to find out how they prefer to see the divots that inevitably appear.

Some courses prefer golfers to leave long strips of removed turf from repeated swings. Others may desire the divots to be spread out instead.

However, I don’t know any greens keepers who would be pleased to see a large square of nothing but dirt after somebody’s practice session ended.

They will appreciate that you asked them.