Giving thanks for charity through golf

The professional golf tours and their associations with local charities generate much of this money. However, most charity golf events are not involved with the PGA or LPGA. Instead, these tournaments serve local needs or a regional element of larger charitable interests.

One of the most successful Cape Region examples is Clothing Our Kids, which buys and distributes clothing and footwear for needy children throughout Sussex County.

A fall golf tournament at Peninsula G&CC, where many COK supporters live, became a primary fundraising tool. Kathleen Blouin of COK said their 8th annual event October 10 brought in over $100,000. The items purchased with these funds are distributed through 10 Sussex County Head Start programs, 34 elementary schools, and 10 middle schools.

The Second Annual ACE Cup competition at Kings Creek Country Club is a good example of a local fundraiser that supports regional needs. 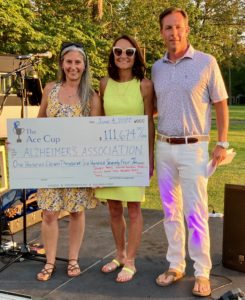 Charity fundraisers often include the presentation of outsized checks

Sawyer Brockstedt of Rehoboth Beach is a nationally ranked junior golfer whose exploits have often been celebrated in this column. She and her family recruited eleven similarly talented golfers and their families to come to the Cape Region. The Ace Cup required each competitor to raise funds for the Alzheimer’s Foundation. One of Brockstedt’s grandparents is currently struggling with the condition.

The first event in 2021 raised $70,000, while the second event last June generated over $111,000. Officials with the Foundations’ area chapter were there for the check presentation complimenting the young women for their success.

Each fall the Milton Fire Department and its Ladies Auxiliary hold a tournament at The Rookery to raise money for the volunteer fire company. Tournament chairman Paul Caras said this year’s event raised $14,125, which will purchase necessary equipment.

The Lodge’s outing held Oct. 7 at Mulligan’s Pointe in Georgetown raised over $5,000. Among other beneficiaries, the money supports Canines Assisting Service Heroes, the Delaware Veterans Home, a Delaware Tech veteran scholarship, the Home of the Brave, and a Frets4Vets music scholarship for a veteran with PTSD.

Meals on Wheels Lewes-Rehoboth depends on its always sold-out golf fundraiser as a major money maker for the popular organization. With a base of over 100 volunteers, its drivers cover seventeen routes to bring nutritionally balanced meals to homebound elderly and disabled Cape Region residents, helping to maintain independent living options for as long as possible.

Some organizations hold or benefit from several golf tournaments each year.

The Beebe Medical Foundation received nearly $175,000 in 2022 from seven tournaments held throughout the Cape Region. The Ruddo Golf Classic at Ocean City Golf Club in May netted $10,000 for Beebe’s Tunnell Cancer Center near Midway. The Baywood Classic, also held in May, brought in almost $59,000 net for Beebe Oncology Services, the South Coastal Cancer Center in Millville, and the Tunnel Center.

The South Coastal Golf Classic at Bayside Resort GC netted nearly $30,000 in July. The Jean and Joan Golf Tournament at Kings Creek CC in September raised the same amount for Beebe’s Oncology Services. The $6,500 raised by the LPGA Pink Ball tournaments held throughout the golf season were also directed at Oncology Services.

The Dewey Beach Lions Club designated Beebe’s Women’s Health program as the recipient of $10,000 from its September tournament at The Rookery. The Tanger Pink Golf Classic, held in October at Baywood Greens, also netted over $30,000 for Beebe.

Kay Young, Executive Director of Development for BMF, said, “The Beebe Medical Foundation is grateful to the businesses and individuals who sponsor and play in our golf tournaments. We are also so grateful to the dedicated families and volunteers who give their time and resources to make these events so successful.”

The First Tee of Delaware also runs or benefits from several tournaments and donations each year. The organization uses golf to develop character and personal growth.

The Delmarva Scramble at Rehoboth Beach CC in June was its main Cape Region event, netting $40,000. A fall tournament at Hoopers Landing raised $3,000, with smaller events at Bear Trap Dunes and Cripple Creek netting $1,500 and $2,250 respectively.

Scott Allen, the Southern Delaware Coordinator for First Tee, also noted the $10,000 contributed by Chesapeake Utilities. Those funds allowed First Tee to offer its 2022 Sussex County programming for 2022 free of charge to participants.

If you have the time or the dime, please consider participating in these and other charity golf events as part of meeting your own charitable goals in 2023.