The Cape Region winter thus far is a study in stark contrasts.

After a period of Arctic blasts and freezing cold, this past week included temperatures in the mid-60s, bringing hundreds of golfers out to Cape Region courses. 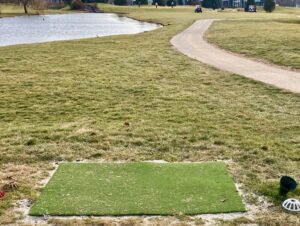 The variable conditions also affected some wintertime maintenance projects that fill the months before the official start of the golf season.

At fourteen tee locations on the 9-hole layout, the ACGC crew installed artificial turf as the tee box locations for wintertime play.

The new mats attempt to deal with one of the effects of the club’s remarkable success in convincing golfers to play it. As Morrison noted, it was not uncommon during the past golf season to host over 200 rounds a day. The course’s tee boxes are not large, and that hampered the ability to move the tee locations to less damaged turf as much as they would have liked.

Morrison said, “They’re working out pretty well. I think the customers understand why we did it and how that will help with next summer.”

On other portions of the tee box locations, the club also installed new sod to replace damaged turf. Golf Course Manager Austin Ebersole said they resodded at least one box area per hole and reseeded the remainder. He also said the warm weather convinced them to hold off for now on placing special blankets they normally use to protect the turf from freeze conditions.

Morrison said some of the new sod already had divots taken out of it, which means that some golfers have a stronger sense of entitlement than they deserve.

ACGC is also updating some irrigation system elements. Pipes and valves don’t last, so a regular process of swapping out and replacing them is an annual chore. In addition, the staff overseeded and added new seeding on other parts of the layout.

At The Rookery near Milton, course builder/owner Chris Adkins said they plan to do a major upgrade of the paved cart paths. Several segments of the current pavement experienced cracking and heaving from tree roots underneath. In addition, depressed path areas led to water damage and erosion.

Adkins also said they plan to enlarge and improve the practice range area. The last few years’ huge increase in rounds played at The Rookery impaired the maintenance staff’s ability to keep the range turf in good health throughout the season.

On several days this past summer, the course restricted range use to artificial mats while the main grassed areas were aerated, newly seeded, or otherwise recovered from thousands of divots.

If it can be safely designed, a larger teeing area for the range would better accommodate the existing demand.

Golf Digest ran a story recently about golf handicap differences. The United States Golf Association gathered handicap scoring data from the World Handicap System for each state as well as DC and Puerto Rico, combining the men’s and women’s handicaps to create a ranking for all 52 jurisdictions.

Mississippi led the country with a fine 11.8 average handicap index, followed by North Dakota (12.4) and Oklahoma (12.8).

Delaware normally markets itself relentlessly as The First State but didn’t come close to those other three states. In fact, Delaware’s average handicap index of 21.6 put it dead last in this ranking.

There could be several explanations for the difference between Delaware’s golfing community and those from better-scoring states.

It is also possible that Delaware has more senior golfers than less retirement-friendly states. Older golfers tend to watch their handicaps inevitably rise over time, sad to say.

Golf Magazine recently published its listing of the best golf courses for each state, relying upon a 117-member panel and a variety of assessment approaches, including but not limited to course design, its setting, and the challenges presented to golfers of all levels.

I am not surprised. Congratulations to both.