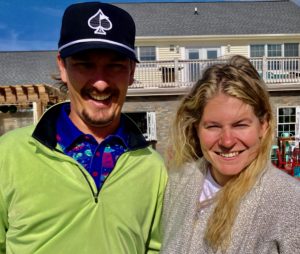 Congratulations to Austin Ebersole and Britt Morrison of American Classic Golf Club in Midway for becoming the new World League FlingGolf champions for 2022.

FlingGolf uses a single stick for both full swings and putting on a regulation golf course. It looks a bit like a miniature lacrosse stick, with a flat side for putting. ESPN televised the ACGC’s own FlingGolf tournament this past summer.

Both athletes benefited from a scoring feature of FlingGolf – the Reggie. When a player flings a shot onto a green in regulation, the hole score is lowered by a stroke. Otherwise, scoring is the same as regulation golf.

Ebersole made 13 Reggies in 18 holes in the first round, lowering his score to 59. The resulting six-stroke advantage came in handy for the three-hole final round, when he finished two strokes ahead of second.

Morrison’s FlingGolf nickname is “Reggie Queen,” which gives some indication of her talent. She credits javelin throwing for her high school track and field team in central Pennsylvania for helping develop her FlingGolf skills. “I feel more confident than with regular golf. I like the easiness of it,” she said.

Ebersole’s FlingGolf handle is “Showtime,” which makes complete sense to those who know him, including the Flingers in the weekly matches held at ACGC this summer. Morrison said they usually had over 30 players each Friday afternoon, about half locals and half tourists.

American Classic hosts over 600 FlingGolf rounds each year, according to Morrison. The course keeps 30 sticks in stock for rent at $3 plus the greens fee. He said the players include several converts from normal golf.

Ebersole compared regulation golf and FlingGolf to skiing and snowboarding. They both take place in the same environment, using related but different skill sets. Flingers also tend to be more accurate with their shots than regular golfers, which means they can peacefully co-exist and play the golf course at the same time.

As for technique, the rules permit a Billy Madison-like step-and-throw motion, but Ebersole also stressed the need to throw “up and out.” He said he drew upon his own background as a high school quarterback. Cape Region surf casters should also readily understand the concept.

Ebersole also noted that Fling sticks do not produce the high-speed backspin on the golf ball that comes from the combination of higher head speeds and clubface impacts in regular golf. This means that FlingGolf balls will be much more affected by the wind, whether into it or from the sides.

Bear that in mind if you decide to try your luck with this new way of enjoying golf. 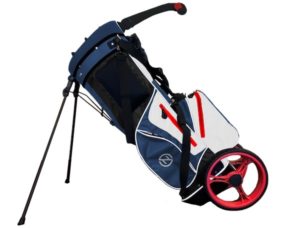 I like to talk to John Iacono at every PGA Show I attend. The affable yet intense founder and president of Zero Friction is a born salesman. He is also committed to bringing new and interesting products on-line every year.

Iacono and I first looked at the company’s new Wheel Pro Push Cart golf bag ($349.99 SRP). The bag has its own removable 11-inch wheels and an integrated grip that flips into place. When I suggested the wheels’ location adjacent to the bag sides made it potentially unstable on slopes, he quickly showed me how the next iteration will have the wheels click into place 1.5 inches further out.

While the current offerings are offered in three color schemes, Iacono readily acknowledged that these bag/cart combos would be great for college or high school teams, both for logo options as well as cutting storage needs for travel roughly in half.

We also discussed the company’s new Turf Tees, which are three inches long and with a beveled two-prong tip ($12.99/30 pack SRP). At the ball end customers can buy the normal ZF three-prong holder or a “squared off” version with air holes under the ball location.

Iacono said these tees will not tear turf roots like a regular tee can.

He also laughed when I told him the Turf Tee should also be adopted for use in a club’s food and beverage operation. Each one could hold two or three olives as a skewer for a martini or keep a large sandwich together as it is served.

I am completely serious about this.

One version ($21.99 SRP) uses an enhanced pad in the palm to help golfers with bone injuries or carpal tunnel syndrome. The other one ($24.99 SRP) includes a wrist strap for additional support. Both feature copper-infused lycra, taking advantage of long-running and disputed claims that wearing copper conveys health benefits.

I don’t take sides on that issue other than to note that placebo effects are often real.