For the past several years, Cape has usually lost to CR in the opening match of the season, typically around March 25 or so.

When that happens, it’s often a brutally cold day, with either strong winds off Rehoboth Bay for the home meets, or similar gusts from the open fields west of Wyoming, DE, at Wild Quail Golf & Country Club’s wide-open layout.

On April 5 at Wild Quail, however, the temperature never rose above 43 degrees, and the winds were often of the 15 mph variety. 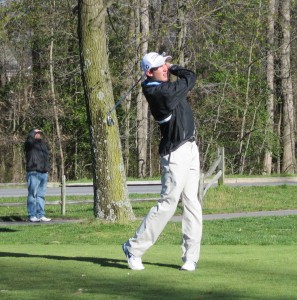 It felt just like any other opening day match against the Riders.

On the morning of the match, according to Cape head coach Claudio Smarrelli, the athletic directors of both schools chatted about a possible postponement for a warmer day.

I’d like to say that cooler heads prevailed when they decided to keep to the April 5 schedule–but that would be so wrong, on so many levels.

The 155-213 score was also quite a bit more lopsided than in past years, but that’s mostly due to Cape fielding a very young, mostly inexperienced squad this year.

Caesar Rodney’s Jack Dixon won medalist honors on his home course, with an even-par 36 on Wild Quail’s back nine. Junior Matt Zehner led the Vikings with his 46, but admitted that score didn’t reflect his true talent. “I started off well today, but didn’t really finish out the round the way I should,” he said.

Ninth-grader Dane Palmer was teamed up with Zehner for the match, and that might have helped Palmer a bit. Palmer said he has already scored better than the 52 he posted against CR, however, and expects to play better.

Palmer also enjoyed a bit of luck on the 500-yard par 5 eighteenth hole, when his tee shot clattered through trees a few times before coming to a safe landing in the fairway of the adjacent hole to the right of the 18th. He managed to make bogey from there.

Ninth-grader Maddie McGreevey continued her steady improvement with her 56, good for third best for the Vikings. My observation of her bogey on the 338 par-4 fourteenth hole showed she is already learning about course management.

McGreevey’s tee shot landed in the right rough, well back of the green. She took careful aim and hit a punch shot to advance the ball, instead of trying for a miracle. Her third shot landed on the green, and she earned her two-putt bogey.

Senior Barry Staibler completed the team scoring with his 59, which he characterized as an “off day.” When playing to his abilities, Staibler thought he could finish in 45, so at least he has a realistic goal.

The Vikings were to host Delmar High School at Rehoboth Beach Country Club April 6, and then travel north to face Dover April 12.

Cape Region PGA golf pros are trying to add their clubs to the increasing number of participants in the PGA Junior League Golf Program.

Blending bits and pieces from other youth sports leagues, the Junior League is aimed at boys and girls ages 13 and under, as a way to learn and enjoy the game of golf in a fun, competitive atmosphere.

With team names and numbered jerseys, the kids play scramble format matches against other participating squads, which highlights the team competition element.

Either a PGA or LPGA golf professional captains each team, serving as the coach and tasked with creating an enjoyable environment, both on and off the course.

Rookery Assistant Pro Brandon Laigle is slated to handle the captain duties for the squad.

Teams are required to have a minimum of eight players and a maximum of 14 players.