Due to recent aeration, the two teams competed on the back nine at RBCC. The ponds and other hazards on that part of the challenging layout took their toll on the two young teams, with Cape winning 213-238. 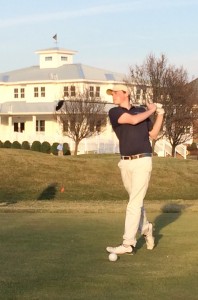 Cape junior Matt Zehner tees off on the tenth hole during his March 23 match against Sussex Academy. He won medalist honors for the day.

Cape junior Matt Zehner scored medalist honors with a 43, with birdies on the 17th and 18th holes offsetting a less than Zehner-like 9 on the par-3 thirteenth.

Freshmen Reed Jones and Dane Palmer tied for second best for the Vikings with their 57s, the same score made by Freshman Tom Hudson of the Academy. Sophomore Kyle Monigle’s 62 completed the Viking team scoring.

Academy Sophomores James Riddle and Padraig Loftus shot a pair of 60s for the Seahawks, followed one stroke back by eighth-grader Caden Schell.

The Vikings picked up their second victory the next day, winning 214-261 against Laurel High School at the Hoopers Landing course in Seaford.

Zehner won medalist honors again with his 45, while Kyle Monigle posted a 54 for second best among the Cape players. Dane Palmer matched his 57 from the day before, third best for the Vikings. Saxon Kalb made his first varsity contribution with his 58.

Maddie McGreevy took 11 strokes off her Sussex Academy match score, which was marred by shots into ponds and the occasional OB. A complete newcomer to golf, but a competitive athlete in cross-country and swimming, McGreevy is showing signs of progress, along with her young teammates.

Jones dropped back a bit from his first match score to take sixth place among the Vikings.

Head Coach Claudio Smarrelli noted, “With the exception of Zehner, most of the players are just beginning to learn the grip. However, they have a great attitude for the game. They want to be like Jordan Spieth or Jason Day.”

The Vikings were off on spring break this past week. They return to action April 5 with an away match against perennial Henlopen Conference contender Caesar Rodney High School, at Wild Quail Country Club. Then there’s an April 6 home match at Rehoboth CC against Delmar High.

Bob Curry shoots Holes in One on Two Consecutive Days–Really

That was Bob Curry’s first comment to me, when asked about his second-ever hole in one, made March 9 with a 4-iron into the wind on the 126-yard par-3 13th hole at Rehoboth Beach Country Club.

Actually, the real miracle was that he made his third hole in one the very next day, this time on the 125-yard 15th hole at RBCC.

Curry chatted with longtime club pro Ron Barrows. He is sure that two holes in one by the same golfer on two days in succession had never before happened at Rehoboth.

On March 9, Curry was playing with his wife Kathleen, and watched his ball fly toward the green as she prepared for her own shot. “I was the only one to see it go in. I flagged down the foursome behind us on the 12th hole to witness us taking the ball out of the hole,” he said.

Bob Curry (2d from right) made a hole in one on March 9 at the 13th hole at Rehoboth Beach CC, witnessed by his wife Kathleen (right). Dennis St. Germain (left) and Ed Perry (2d from left) witnessed Curry’s ace the next day at the club’s 15th hole.

Curry played from the green tees, a self-described birthday gift to himself now that he’s 75. He played from the same tees again the next day, and used a 6-iron for his approach to the 15th green. Former club president Ed Perry and club member Dennis St. Germain witnessed Curry’s March 10 ace.

“When I joined the club a long time ago, I was told to always take an extra club on that hole,” Curry said.

Curry’s first hole in one took place in 2009, on the island par-3 fifteenth hole at The Rookery South.

Curry noted that Rehoboth CC rules now call for mandatory participation in the hole in one program, to help offset the usual celebration expenses. He was very happy to comply.

“We had a lovely party at the club last Friday night [March 18] and both flags were signed by everyone in attendance. That’s a very nice tradition,” Curry said. “And yes, I’m getting them framed.”