Speeding up the game

Last March I wrote about a major proposed revision of The Rules of Golf that goes into effect Jan. 1, 2019.

The United States Golf Association and The Royal & Ancient suggested these changes to make the game more fun for more golfers, more easily understood, and to “reinforce the game’s longstanding principles and character,” according to a USGA statement on its website. 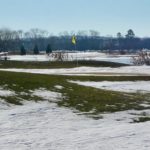 The first hole at American Classic Golf Club. Cape Region golf courses must depend on solar power of the very old-fashioned variety to clear the snow from the recent major storm.

Public comments on the proposed changes were accepted until August 31, 2017. The rules organizations were to finish their work on the draft revisions by early 2018 and obtain approval of the changes from their respective Rules of Golf Committees and boards.

Sometime thereafter, the new rules will be published along with the Committee Procedural manuals and other related documents. USGA members will receive their copies of the new Rules books as part of their membership renewals, as in past years.

Several changes reflect the influence of other initiatives that the USGA and R&A have supported. For example, pace of play is a nagging issue, especially on public courses where some folks seem to have only a vague familiarity with the fact that other people are also trying to enjoy themselves.

Under most conditions, 18 holes of golf should take no longer than just over four hours, and in many cases far less than that. Waiting for slowpokes in front of you or your group does not add to the game’s appeal.

The new Rules support several different ways to speed up a round, such as recommending that each golfer make each stroke in no more than 40 seconds. With some preparation while waiting for a playing partner’s turn, such as knowing which club to use and taking into account the wind or other factors, staying within the 40-second limit should be easy to do.

According to the USGA, the new Rules also “affirmatively encourage” golfers to play out of turn in stroke play when it is safe to do so, instead of waiting for the golfer who has “the honors.”

Tournament play should also quicken with a new Local Rule that recognizes a new “Maximum Score” for each hole, such as double par, triple bogey, or double bogey net. Some Cape Region charity fundraiser tournaments I have participated in have used some version of this arrangement. This is especially handy for accommodating golfers who only play a few times a year, if at all.

This proposed change is also similar to what I have observed in routine play among golfers who know their maximum score options under the Equitable Stroke Control procedures of the USGA’s Handicap System. These golfers simply stop playing a hole when they reach their ESC maximum, such as 7 for those with handicaps from 10 to 19.

Several other changes to the Rules should also improve the pace of play, including a few alterations that meet additional policy goals.

In many rounds of golf, the ball must be “dropped” by the player at a new spot, such as when taking the next stroke after hitting into an adjacent pond. Older golfers may remember the old rule that required them to stand and drop the ball behind their back. Many years ago this rule was relaxed to permit drops from the front side, but with the arm level with the shoulder. At times, especially in tournament conditions, this rule becomes a source of controversy and delay, such as when competitors would complain about the quality of the drop.

The new Rule permits golfer to drop the ball from as close as one inch above the ground. There is still a chance for the ball to take an odd bounce, but that prospect is much diminished. In addition, the ball must be dropped in a single required relief area, instead of the current rule requirements that could lead to multiple drops.

Furthermore, taking relief now requires using fixed distances, either 20 or 80 inches depending the circumstances. You can use markings on the shaft of a club for this purpose. Many golfers will put a bit of masking tape around their putter shaft at 20 inches from the grip end or two bits of tape at 20 and 40 inches from the grip end of their driver shafts for these purposes.

Another pace of play issue relates to the time spent looking for lost golf balls. The current rule is set at a maximum of 5 minutes from when the search begins, but the new rule cuts the time limit down to three. When I have discussed this proposed change with Cape Region golf pros, they usually laugh and tell me that for many golfers the time spent looking for a lost ball is directly proportional to the ball’s cost.

This may explain why I have no difficulty finding Pinnacles or Top-Flites and some lesser-known brands while looking for my own TaylorMades, and rarely see any lost high-priced models such as Titleist ProVs.

I will discuss more of the proposed rules changes in upcoming columns.