Georgia Hall on the links of South Jersey

The Bay Course at Stockton Seaview Resort presents the shortest yardage on the LPGA tournament schedule, at just over 6,200 yards. It has hosted the ShopRite LPGA Classic presented by Acer for many years.

The course is flat, easily walked, and fairly wide open. Trees edge some fairways but don’t affect normal shots to the green.

Nonetheless, the layout presents real challenges. As 2017 ShopRite winner I. K. Kim told me, “It will test you, but not physically. It depends on the wind. The poa annua greens are bumpy, so it forces you to focus on the process and not the result. That’s not easy to do. The greens are also quite tight. You need to put it in the right places.”

The wind is a major factor when combined with the multiple fescue patches throughout the course. The foot-high gnarly grass will catch and keep a mishit shot or cause a wind-aided disaster from an otherwise good swing. 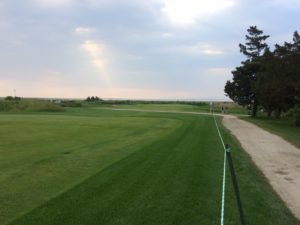 The links-like second hole on the Bay Course, home of the ShopRite LPGA Classic

So let’s recap—flattish layout, trees not a factor, bumpy greens, high grass, wind as a major defense. Sounds just like a links course.

The 22-year old has quite a resume. She played for Europe on the 2017 Solheim Cup and won the 2017 Ladies European Tour Order of Merit. Hall played well in Q-School last year to earn her way onto the LPGA Tour.

I followed her group in the early morning Saturday second round of the 2018 ShopRite, in light winds. Hall had played her first round in par and needed to go lower to make the cut.

She started off with a bang on the par-4 first hole, landing her 100-yard approach from the left rough to 5 feet past the green and making birdie from there. Putting was a bit of a challenge, however, thanks to swarms of gnats that plagued her group for several holes.

Hall parred the difficult second hole and then belted her drive nearly 300 yards on the 492-yard par-5 third, leading to an easy two-putt birdie. She birdied the fourth hole with a fine approach that finished 12 feet from the hole.

Hall faced her first real challenge of the day on the sixth hole, when her drive landed in soggy rough about 135 yards out. After a rules conference about possible relief, Hall pitched to the fairway 107 yards from the hole. Then she hit her best shot of the day to less than a foot from the hole, saving par.

Hall made her third birdie on the 8thhole when her approach finished 4 feet from the hole from 100 yards out. She hit a nice drive on the par-5 ninth hole and landed her second shot 15 yards short of the green in the left rough. She chipped to 5 feet and made another birdie.

The wind picked up a bit, and Hall’s ability to spin the ball didn’t always help her. Her approach on the short par-4 10thspun back 25 feet from the hole, leaving Hall a challenging two-putt for par. She ran off three more pars and then hit into trouble on the long par-4 14th. Hall’s approach from 175 yards out finished in the right rough 20 yards from the hole. A chip shot ran 20 feet past the hole, and she two-putted for bogey.

Hall parred the next three holes and made her fifth birdie of the day on the 507-yard par-5 18th. Her drive flew into a fairway bunker 225 yards out, but she made a nice recovery. Her third shot from 100 yards landed 7 feet left and hole high. Hall made the putt for a 4-under round, easily making the cut.

Hall was in a good mood when we chatted after her round. “Very nice. I like links golf and kind of feel at home here.”

“It’s about the same [as in England], really. The rough’s the same and the greens have to be kind of not as quick in case the wind gets up, so I was happy to make the morning round,” she said.

Hall wasn’t too keen on the bugs. “The first few holes it was really bad. It wasn’t very nice, but I heard it’s supposed to be quite windy this afternoon,” she said.

Concerning the predicted thunderstorms the afternoon starters faced, Hall was fairly matter of fact. “Just whatever happens, you know. In links you get good draws and bad, so it’s just golf and just life, so you just have to get on with it,” she said.

Hall continued her good play in the final round with a 2-under 69, ending in a tie for 28thplace.