Thanks for all of your help

The Cape Region community should be proud of its many successful efforts to help those who need it, with dozens of events and activities that convince people to open up their wallets for good causes.

In this column this year, I publicized 24 golf fundraiser tournaments held throughout the area. Combined with local charity golf events that didn’t make it into this column, that’s more than one fundraiser per week during the busiest part of the Region’s golf year.

Here are some examples of what can be accomplished.

The Joshua M. Freeman Foundation supports and presents arts programming and education in southern Delaware and Maryland’s Eastern Shore. The Freeman Stage summer concert/show series is its most well known project, but the Foundation also brings a variety of arts education activities to area schools.

The Foundation’s Golf Tournament is a sell-out event held each fall at Bayside Resort and a major fundraiser, with a $750 per player entry fee and a wide variety of auction items. Here’s the official statement from this year’s event: “The Joshua M. Freeman Foundation Golf Tournament celebrated making the arts accessible with beautiful day of golf followed by the Black and Tan celebration.  The tournament exceeded its fundraising goals for the event, and all proceeds directly support the Arts Access Initiative of The Freeman Stage.”

Mary Rio of The Peninsula Golf & Country Club in Millsboro founded Clothing Our Kids when she learned many children in Sussex County didn’t have enough clothes for their school days. That inspired the creation of the annual Clothing Our Kids tournament.

The COK’s sixth annual tournament, held October 7, featured Lt. Governor Hall-Long as the official starter. It brought in $80,000. In addition, COK shifted its silent and live auctions segment, formerly held during the tournament, to a new event held April 4. It raised over $54,000.

The 9th annual Eleanor Soltner Memorial Golf Outing was held Aug. 7 at Rookery North. The event supports Delaware Hospice in Milford, and this year brought in $23,000.

On Oct. 5, the George Simpson Men’s Group at Epworth UMC held its Dave Waters Memorial Golf Outing at the American Classic Golf Club near Lewes. The event raised over $22,000 to benefit three local missions for the needy and homeless in the Cape Region.

Each year the Epworth Food Program serves over 5,000 meals and also provides canned goods and personal hygiene products to over 1,800. The Immanuel Shelter helps over 3,000 with overnight shelter and meals during the winter season. The Community Resource Center also assisted thousands of individuals with a wide variety of issues, including food, family crises, medical issues, and basic needs for infants and children.

The event supports the Julie Dickson Foundation, aimed at helping women and girls with academics, business pursuits, and athletics. Helene Guilfoy set up the foundation in memory of her wife. The event raised nearly $5,000.

The scholarship application is available online at dsga.org. The award ceremony takes place in June at the annual RBCC Junior Open tournament.

The Rehoboth Beach Country Club 18-Hole Ladies Golf Association held their 15th annual Black and Gold charity tournament on June 28. This year’s event raised $1,415 as well as 280 pounds of groceries for the Food Bank of Delaware.

Butch Holtzclaw, director of golf at The Rookery, hosts an annual pro-am tournament each fall for the benefit of The First Tee of Delaware. The popular junior golf program attempts to use the best parts of golf to instill valuable life lessons, while having a lot of fun at the same time.

This year’s pro-am took place Nov. 6 at Rookery South and raised over $5,000. Among other highlights, Connor Perry made an incredibly rare albatross on the par-5 13th hole, while Michael Chanaud of Bear Trap Dunes won the pro competition with a 4-under par 67. 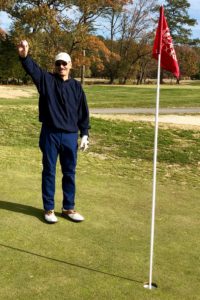 If you have the time and the dime, please consider playing in one or more of these events as part of meeting your own charitable goals.

Another ace at Rookery South

Congratulations to Jim Sanitate for his hole in one on the ninth hole at Rookery South on Nov. 21. The Rehoboth area resident used a nine iron for the ace.